Your Own, Personal Jesus

When I walk down the street, and I pass another person, I make eye contact. If I’m feeling really good, I’ll maybe add a smile, perhaps a “howdy!”, but at the very least: eye contact.

This seemingly meaningless gesture, usually done with little thought and almost automatically is actually immensely important. An enormous amount of information is conveyed simply by looking another human being in the eye. Without a word, I am communicating:

Which is why it discourages me so much that Russians do not make eye contact; most especially, they do not smile, and saying hello to someone you don’t know is absolutely out of the question. If you try to make eye contact with a woman, you will (if successful) receive a brief glance and an immediate redirection of her gaze, along with a tightening of all her facial features, often times accompanied by a frown (which, in most cases, was there before you tried to establish a moment of mutual-humanity—so you’ll inspire a deeper frown). If you try and make eye contact with a man you are basically challenging him to a fight; thus, you will either be met with the immediate redirection of his gaze (which, as far as I can tell, means submission, as with making eye contact with dogs) or be met with …other unpleasantness.

And let’s not even talk about smiling, because smiling, I’m told, is for fools. This concept, I guess, comes from the idea that everything in Russia is serious, unpleasant, and should be met with a face that is appropriately dismal. Thus, if you are smiling, you must be an ignoramus, or some foreigner [in my case, both], because no true Russian with true Russian problems would walk around with a pleasant, approachable look on his face unless he were really stupid, or really foreign.

For the most part, Russians don’t look at each other at all; they quickly shuffle down streets, staring at their feet, wrapped in coats, collars up to their noses, in silence. What is communicated when two such people cross paths?

First and foremost, there is a lot of crime in Saint-Petersburg, so everyone assumes everyone else is a bandit and tries to avoid all contact as much as possible. Here’s my well-practiced and mastered “I’m-not-really-a-foreigner-I’m-really-a-Russian-and-a-badass-so-don’t-mug-me” face: 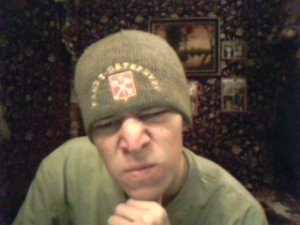 My hypothesis is that the real source of this unfriendliness is the deeply ingrained Russian Orthodox mentality that permeates Russian society. For all Christians, the ultimate goal in life is to be like Jesus, emulate his virtues and his deeds, to care for each other, mercy, etc. For Orthodox Christians, the ideal is to be Jesus. I literally mean that the Russian Orthodox church teaches that Russians ought to be Jesus, that to live is to suffer horribly, publicly, and die for everyone else’s sins—

There is some perverted part of human nature that enjoys being unhappy, that likes pain (e.g. “I just needed a good cry.”)—something that impels people to, given the choice to be happy or to be miserable, choose misery (i.e., Milne’s Eeyore or, Dostoevsky’s Marmeladov). The Russian Orthodox church has been playing this tune to Russians for over a thousand years, and there is a deep-set chord here that resonates in the Russian psyche. Couple a thousand years of oppressive, brutal monarchy [including Stalin and Putin] with a thousand years of teaching people to be satisfied with their bad lots (and the promise of a grand afterlife) and what you have is a system of complacency and acceptance of travesty where righteous indignation and active resistance should be.

Thus, a practical pessimism pervades the logic of the common Russian. He expects bad things to happen, waits for them to happen, and if—by chance—bad things don’t come, he assumes they will in the next minute. What, historically, has ever proven otherwise for Russians?

Each sees his own suffering as the noble suffering of Jesus; each feels himself crucified and simultaneously relishes the crucifixion; he has been taught not to be like Jesus, but to be his own, personal Jesus.