For my other writings on The Clock, see:

I am by myself this time, watching The Clock again, anticipating, as any good Californian would, the arrival of 4:20 pm.  C’mon, Marclay. Don’t be square. Give a little shoutout to all the stoners in the audience.

This time, it is Friday so the Museum has its monthly First Fridays event—tons of couples come to wait in line to mingle among the art with a strong drink.  It’s a good date.  I, regretfully, have no date, so everyone with a date annoys me a little.  I have made a few other tactical errors.  I haven’t eaten and am rapidly becoming hungrier and grumpier.  I am also pretty sleepy.  This sitting might be a bit of a haul.

But at least I’m early enough that there is no line.  How different from when I was here at 1 a.m. and had to wait until 4 a.m. to get in. Nobody cares about 4 p.m.  I sit smack dab in the center of the front row of couches and begin to zone out into the incessant Marclay present.

“If we take time and fold it in upon itself, and then we unfold it, what happens to the wrinkles, hm?”
I find this question inexplicably moving.
Surely Madeleine L’Engle knows he answer.

5 p.m.
A critical liminal space.  Scenes bounce back and forth among businesses closing, closed, or pretending to be closed.  A professor sets his clock forward deliberately to end his office hours prematurely. I can relate.
A man arrives too late at a closed store.
Another arrives too early to ask a girl out on a date. He’ll be back at 6, he explains.
5pm hits.
Many, many people triumphantly leave their jobs. Punch out. Fuck work. Fuck Taylorism. Fuck Capitalism.  The Hudsucker Proxy (1994)’s ironic iconic clock makes a 5 p.m. appearance:

THE FUTURE IS NOW 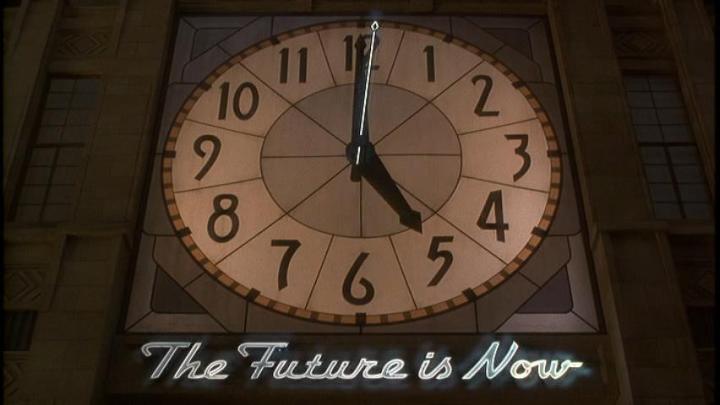 Behind me, somebody loudly explains the concept of The Clock to her friend in a whispered not-whisper:

“ALL THESE MOVIES HAVE A CLOCK IN THEM!”

I both love and hate this person.

At 5:10 Clint arrives. Now this is getting good.  Marclay is splicing between the final scenes of For a Few Dollars More (1965) and The Man with the Golden Gun (1973).  A shot! Gian Maria Volonte falls. Justice is served.  The minutes roll on.

“I want you to close your eyes and think a thought that no one has ever thought of before.”

Another good, inexplicably moving excerpt.  I close my eyes. I try and think of a thought no one has ever thought of before: I wonder if there is enough Clock footage to make a sequel to The Clock.  Obviously we’d call it The Week.  And if not, would it make sense to update The Clock with new footage, in, say, 2020.  There must be oodles of unused footage for The Clock—how did Marclay choose what not to put in?  What was his hierarchy?  What would a B-List version of The Clock look like?  I wonder if anyone has ever had these thoughts.  Harrowingly I recall that half my job in graduate school is generating original thoughts (ha), and the other half is checking to see if other people have already had those thoughts (they have).  This makes me anxious.  I twirl my hair.

When it comes to Time we are prisoners.
Gentlemen, all I’m asking you…
is to witness a demonstration of movement…
within the fourth dimension.

Wells’ Time Traveler has startled me.  I remember some quote from somewhere:

Time is prison from which there is no escape.

At 5:49, Peyton Farquhar is about to be hanged. He begins the longest, last minute of his life.  So Ambrose Bierce anticipated time dilation! Neat-o. I note that in my dedicated Marclay book. ‘Add this to your time-bibliography‘.
Underlined twice.

I run my home precisely on schedule.
At 6:01, I march though my door!
My slippers, sherry, and pipe are due
at six-oh-two…!

Another loud couple tumbles onto the couch next to me.  I’m vaguely annoyed.  Someone in the audience behind be asks in another whisper-not-whisper: “That’s a famous actor! Who’s that?” I somewhat nervously check my watch, forgetting that the time is very much on the screen.  It’s 6:02 of course.

The six o’clock hour has a lot of poignant kissing scenes, juxtaposed with quite a few ticking time bombs.  All of this makes me rather lonely.  I think of how love is all about timing.  Timing timing timing.  All this timely kissing. These time bomb kisses. Tick tick tick tick.  Just knowing, somehow, the moment when it is absolutely right to just. kiss. someone.  It’s killing me.  No one ever talked themselves into a Romance. What about all those missed kisses?  I’m slightly more than annoyed at the loud couples.  Think of all the people who are perfect for each other, but just are temporarily (ha) subject to the wrong metaphor of time—perhaps the wrong age (like Bill Murray and Scarlett Johansson in Lost in Translation). Or when your psyche sinks into depression and you simply cannot see beyond the horizon of the near-now saturnine present. I’m filled with sappy sentimentality. A line of my own saccharine high school poetry comes to mind:

Waiting for that one word with which to woo, not wound.

At 6:45 Audrey Hepburn accidentally sets an old lady’s hair on fire. Behind me a man stentoriously snores. 7 p.m. approaches. Marclay fittingly gives us the final scene from Seven (1995). Another clip from V for Vendetta anticipates the explosive midnight finale.  I need to leave.  This sitting has been expectedly trying.

Waiting. Waitlisted. Waiting on you. Waiting for the when. With Marclay, when is always now.